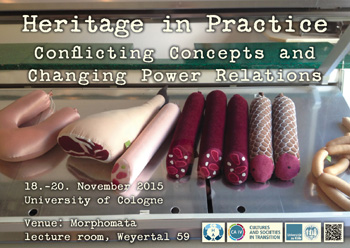 The official introduction of the landscape concept into the World Heritage discussion – Cultural Landscapes in 1992 and Historic Urban Landscapes in 2011 – has influenced the debate both in the field of landscape studies and in heritage studies. What might have been, in the very beginnings, a mere attempt to overcome the separation of natural and cultural heritage by integrating non-western perspectives and by defining cultural landscapes as „combined works of nature and of man“, has developped into a major new approach to heritage. It constitutes a perfect starting point for a holistic consideration of heritage as a process, in all its aspect, be they so-called tangible or intangible; being understood as a set of activities it also encourages an analysis of the role of „communities“ as a complex entity, alongside „environment“ as active producers (and users) of heritage.

This panel will discuss current issues of „natural“ heritage as well as aspects of heritage in developing rural and urban environments from the point of view of practice. It will thematize non-western conceptualizations of landscape and environment and their practical impact on heritage interpretation, documentation, conservation and management. A focus might be – „Museums and Cultural Landscapes“ being the topic of the international ICOM General Conference 2016 in Milano – on the role and function of museums related to landscapes.

A crucial objective of UNESCO’s Intangible Cultural Heritage (ICH) Convention of 2003 is the maintenance and safeguarding of ”cultural diversity in the face of growing globalization“ (unesco.org/culture/ich). This particular part of UNESCO’s statement is of considerable meaning: it presents ICH as a means to overcome marginalisation and oppression of the formerly colonized and turn the Other, Southern parts of the globe into more democratic and livable places. At the same time, the actual idea of Cultural Heritage, its inscription practices, discourses on sustainability and valorisation, as well as the marketing and tourism practices associated with it largely tend to negate the continuing power inequalities and colonial settings in which ”safeguarding“ itself takes place. This criticism, uttered by various scholars in the past years, has not been a simple one: ICH is not just seen a framework developed in the North and imposed on people elsewhere, but rather is increasingly understood as a means to adapt marginalized societies and practices to neoliberalism, continuously commodifying people and their lives, constructing them as possessions of humankind, and linking places and practices through property regimes, thereby incipiently turning them into static matter.

The ways in which people, knowledges and ways of life are presented as property, similar to land and other material ressources is, in principle, comparable to previously established colonial forms of commodification. This continuity of the colonial matrix of power within practices of and discourses on ICH is the focus of a critical and reflected discussion. At the same time, ICH has become an influential concept in domains of research and safeguarding activities outside those areas designated by UNESCO. For example, the newly emerging sub-discipline of language documentation partly being dedicated to saving single “endangered languages“, linguistic tourism studies, as well as  new interdisciplinary approaches to the integration of Southern knowledges into Northern academic debates are areas of knowledge production and the creation of infrastructure that are considerably inspired and influenced by debates on and within ICH. This panel aims at a discussion of innovative ways of making critical debates on ICH utilizable to these fields of enquiry, and at asking whether critical debates that in turn emerge out of relevant linguistic and interdisciplinary research are meaningful for the creation of avenues for future research on Cultural Heritage.

Topics addressed in the panel may include: ICH and its role in creating social justice through the recognition of diversity; colonial continuities in the ways in which people, bodies and lives are commodified; acknowledgement and integration of Southern knowledges; ownership and safeguarding issues; ideologies behind archives and sustainability discourses; local/Southern ways of heritaging and making patrimony, and of critically dealing with Northern concepts and practices, etc.